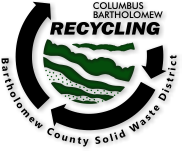 The City of Columbus and Bartholomew County have been leaders in the municipal management of solid waste since 1969. Prior to 1969, the community's disposal needs were served by several open dump sites. Recognizing the need for improved services, the City and County formed a blue ribbon commission to study the waste disposal needs of the county. The commission recognized the need for both a modern sanitary landfill and also the management authority to oversee its construction and operation.

In 1969, via an inter-local agreement, the City and County formed the Columbus-Bartholomew Solid Waste Disposal Authority (SWDA). The SWDA was comprised of five members appointed by the City and County. This authority functions primarily as a landfill manager from 1974 until 1990.

Upon formation of the Bartholomew County Solid Waste Management District in July of 1991, the SWDA was modified in both title and responsibility. The Solid Waste Disposal Authority became the Bartholomew County Solid Waste Management District, or BCSWMD. The BCSWMD was charged by the District Board with the day-to-day operation of all solid waste programs, including landfill construction and operation. The District Board retained sole discretion with regard to the formulation of a comprehensive 20-year solid waste management plan, and the selection of a new landfill site.